George Monbiot is a well known and frequently controversial Guardian columnist and author. It thus comes as no surprise that the cover of his new book,’Regenesis’, does not hesitate to present an immediate challenge, showing, as it does, a bucolic scene of a wildflower meadow with a stark cut out of a grazing bovine very obviously removed. The subtitle of the book provides further introduction , ‘Feeding the world without devouring the planet’. A more succinct summary might be “All farming is bad but livestock farming is more bad than others’: while some aspects of this book are almost Orwellian in perspective, Animal Farm it is not! 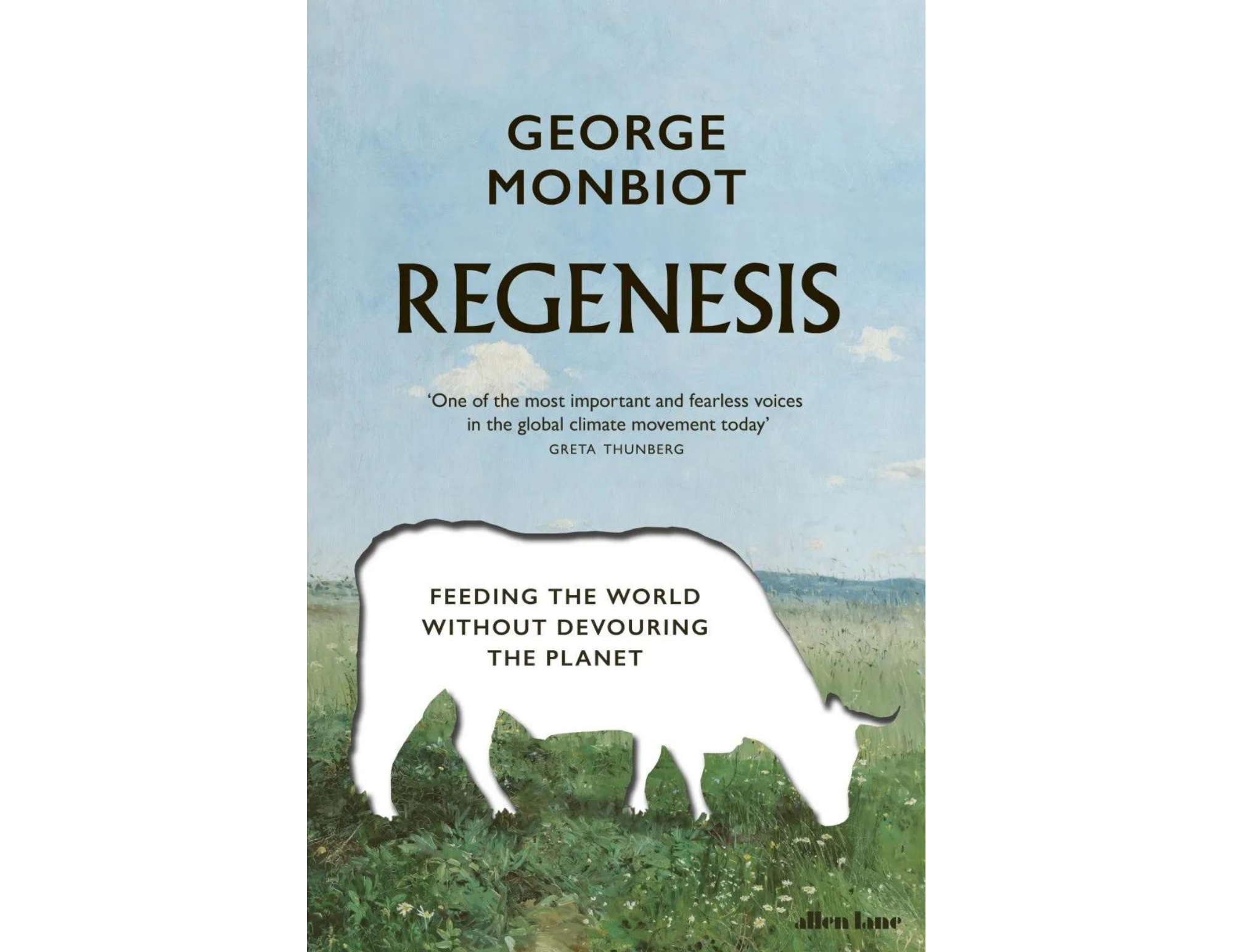 It is a fascinating and stimulating read. In my opinion, the opening chapter, which provides an excellent review of modern soil science and ecology, is worth the price of the book on its own. In recent years, the importance of the fungal and bacterial complexes that link intimately with the roots of living plants, has been increasingly recognised. And through the following chapters, Monbiot constantly returns to the theme of healthy soil, as he examines a number of farming practices and their impacts (positive or negative) upon the soil microbiome. There is still much to be learned about the soil beneath our feet and its value as a carbon sink. Even after reading ‘over 5,000 papers and a shelf of books’ the author states that he still has everything to learn! As evidence of his reading to date, the volume is fully supported by nearly 100 pages of references. His writing is always based on a sound science background, even when he wanders off into more emotional or political areas.

Monbiot’s analysis of the modern global diet, with its dependance on four plant products (rice, wheat, maize and soya bean,) most of which are produced in a handful of countries with supplies dominated by the USA, is enlightening. Having read this, his support for transporting large volumes of food over large distances and his criticism of local food and farmer’s markets came as something of a surprise but his case is supported by facts: on a purely carbon footprint basis, the efficiency of global transport systems wins over the five mile return trip to the local farm to buy a kilogram of organic butter. And his concerns about complex food supply systems and their vulnerability to tipping points, is almost prophetic given that the book was completed before the war in Ukraine has brought an overdue focus on this issue. He is also highly sceptical about biodiesel and wood pellet heating, somewhat surprisingly claiming that the latter is less green than burning coal.

‘Regenesis’ presents a wealth of facts and information, there is too much to absorb in a single reading and I suspect my copy will become well thumbed over the next few months. I struggled with the author’s conclusions as he compared the growth in human and animal populations over the next thirty years. I suspect that in the middle of the predicted surge in demand for animal protein will sit some basic supply/demand economics? Farmers (unless heavily subsidised) will only produce food that they can sell at a profit. Later, Monbiot discusses farm subsidies in some detail but fails to mention countries, like New Zealand, where government intervention in the form of subsidies has not existed for thirty years.

Towards the end of the book, having encouraged us all towards a plant based diet, Monbiot introduces alternative sources of manufactured protein, particularly bacterial protein, to the discussion. This new technology is embryonic and appears to show some promise, but it is not yet a commercial prospect and I suspect there will be a need for some clever marketing before everyone happily sits down to a “bacti-burger”. And how long before the first batch emerges containing Listeria or Salmonella sp.? The technology will require a lot more careful development.

This book is well worth reading but, as the cover suggests, it does carry a strong anti-farming, anti-livestock bias. Some of the writing, draws initially on facts but develops arguments a little loosely e.g. the author’s rant on antibiotics as growth promoters barely mentions the 1990’s EU ban on this practice and omits to comment on the steady reduction of antibiotic use on farms, something which VetSalus consultants have been working on for several years.This section in particular would have benefitted from several more paragraphs of deeper analysis.

Similarly, I found his rapid dismissal of the GWP* work at Oxford University disappointing. Throughout the book there is limited recognition of the fundamental difference between ‘the closed cycle’/biogenic carbon loop, inherent to livestock and plant based systems and the carbon dioxide and methane generated by fossil fuels.

I suspect all readers of these VetSalus reviews will find this book a useful addition to their libraries. It is a stimulating and well argued read. In the final analysis it might be judged a little idealistic but I doubt that this will worry the author too much. If his primary aim was to stimulate an informed argument around much that is wrong with modern agriculture, I , for one, will judge ‘Regenesis’ a valuable and very necessary contribution to the debate.

Regenesis: Feeding the World without Devouring the Planet by George Monbiot