The confusing vocabulary of sustainability

A recent article in New Scientist by James Wong discusses the agricultural term “monoculture” and examines its definition and goes on to contrast it with what it has come to mean in the popular press. Wong argues that, rather than being regarded as universally “bad”, the term is context dependent; there are many situations where intelligent use of monoculture can lead to increased yields (thereby freeing other land for more environmentally friendly uses) or to the reduced application of pesticides and fertilizer; sometimes monoculture results in a positive environmental outcome. VetSalus consultants are involved in discussions about the pros and cons of food production systems on a daily basis and, as scientists, the importance of having clear terminology and precise definitions is very important.

This article will not engage in the sometimes emotional  debates around “good” or “bad” farming systems but will explore the sometimes confusing vocabulary used in these debates and attempt to provide a logical, science based approach to these terms; which is exactly the sort of approach VetSalus consultants bring to all their work.

The language and vocabulary we use every day, is inevitably in a constant state of flux and change; this is not something to be resisted but as language is the core of all communication, it doesn’t work very well if a word or phrase means different things, to different people.

For example, it is not so long ago that the word “organic” simply defined the chemistry of carbon. And as you cannot farm for very long without involving carbon chemistry, so the pedantic scientist might declare that all farming is organic! However, the word has moved on and most people now understand organic to refer to a form of “clean, chemical free, non polluting” farming that is universally “good”. But is this strictly true? And is there a clear definition of what organic really means? There are numerous schemes which regulate organic farming and most of them aim at the same general target but as pointed out by Seufert et al in a 2017 article in Food Policy, there is room for considerable confusion and debate. Many people drink organic milk to avoid “chemicals” yet milk, like many other animal and plant based foods, are rich in oestrogens and other hormone-like substances. And animals on organic farms are legitimately treated with modern medicines: sick animals need treatment, otherwise animal welfare becomes compromised but the regulations applied around the subsequent quarantine periods can often be complex.

In addition, organic farming may also involve considerable ploughing of land and frequently relies on the use of animal manure; both practices, while necessary,  significantly increase the carbon debt. As James Rebanks pointed out in a recent article in The Observer, serious environmentalists need to move beyond the organic label to something more holistic, encompassing good environmental farming: at VetSalus we believe it is too difficult and confusing to define the word ‘organic’ scientifically, and so will avoid its use where possible.

The chemistry of carbon is fundamental to any discussion on farming in a more sustainable way but here also there is considerable room for confusion, some of it driven by vested interests. Fundamentally, ruminant production results in the emission of the main greenhouse gases (GHG); carbon dioxide (CO₂) mainly from on farm energy use but also from animal respiration, methane (CH₄), which is mostly generated by the animal’s digestion of plant material, and nitrous oxide (N₂O) from manure but also the application of fertilisers. The warming impacts of these different gases are currently reported as a CO₂ equivalent (CO₂e), which typically uses the 100-year global warming potential (GWP100) metric. However, the lifespan of these gases in the atmosphere vary considerably and the use of CO₂e simplifies these dynamics, specifically biasing against methane, one of the shorter-lived gases. VetSalus believes that comprehension of the complex carbon cycle is essential if the best evidence based decisions are to be made; there is no room for confusion here!

There are, in reality, two ‘types’ of carbon atoms in circulation, (although there is of course no difference in the actual atoms involved):

Food production accounts for about 26% of GHG emissions, with agricultural production, including fish farming and cropping, accounting for about one third (8%) of this amount.  But food production remains of vital importance to an expanding world population.

Undeniably, agricultural production is the major contributor of methane, and our understanding of the impact and longevity of methane in the atmosphere is incredibly important for ruminant agriculture as methane is frequently reported as the primary contributor to GWP100-based ‘carbon footprints’. Whatever its origins, (and there are several other, non-ruminant, sources of methane release,) methane is a potent GHG with a strong initial warming impact. But as noted above, its atmospheric lifespan is short, naturally breaking down within a couple of decades to be photosynthesised as part of the atmosphere-plant-animal-planet cycle outlined above. So because there have been ruminants on the planet for 50 million years much of the methane is in equilibrium, being broken down at a similar rate to it being released by modern day ruminants.  In contrast, carbon dioxide not captured by this cycle has a potential warming impact lasting for hundreds of years.

To take these differences into account a team at Oxford University have proposed an alternative metric - GWP*. The principle behind the new metric is that carbon dioxide and methane, as outlined above, are not directly comparable; GWP* aims to improve our understanding of the true warming potential of each gas. VetSalus welcomes this initiative because  it leads to better understanding of carbon cycle complexity. What utilisation of GWP* does not lead to is a licence to increase ruminant production.The priority has to be the reduction of all GHG, whatever their origins, whether by better farm management, improved use of technology or increased efficiency of production, reduction of the carbon footprint  is absolutely core VetSalus business. But we would argue that in the case of methane we must use a scientific evidence which fully understands the carbon cycle on farm. In this context it was interesting to note some recent work from New Zealand which assessed the entire farm environment of a range of sheep and beef farms. When the carbon sequestration effect of woodland and scrub areas were included, many of these farms had negative carbon emissions i.e. they were carbon sinks. And this research did not utilise the GWP* metric. Utilisation of GWP* would in all likelihood result in more systems of ruminant production being  compatible with ‘net zero’ emissions. And demonstrate that improved efficiencies in livestock farming will not only release more land for biodiverse uses and further carbon sink, but contribute to global cooling by reducing the pool of methane in the atmosphere.

The term ‘net zero’ itself also has potential to confuse. While traditionally thought of in terms of emissions, the focus should now be redirected to net zero warming contributions.

Alongside all this, it is important to remember that, unless a staggering and unlikely shift in our diets is observed over the next few years, the production of high quality animal protein will  remain a vital part of our farming systems. If large areas of land were dedicated solely to nature restoration or woodland plantations, we would be moving our food production into ever smaller parcels of land, to feed an expanding population, therefore increasing intensification and compounding the problem elsewhere. And as Jepson and Blythe remind us in their excellent review, ‘Rewilding’1, grassland/savannah has always been an important part of the planet’s natural mix.

However we choose to define and measure the contribution from agriculture to global warming, at VetSalus we are dedicated to reducing the greenhouse gas emissions linked to food production from animals by education, use of new technology and improving efficiency of production. This is exactly what the IPCC report of 2018 suggests when it includes improved livestock management as a significant mitigating strategy.(p499)

So what of the term ‘sustainability’ itself,  which has recently entered the vocabulary of many; is this just another synonym for “good farming”. To sustainably produce high quality, nutrient dense food, global warming mitigation and biodiversity regeneration must go hand in hand, with food production, whether from plant or animal sources. Many now argue that regenerative agriculture represents the best opportunity to meet these needs. There is no single definition of regenerative agriculture or a prescription to farm in a regenerative manner, however the evolving definitions focus around a number of key factors:

More than anything else, regenerative agriculture involves a mindset shift, starting by understanding the current state of the environment, looking at what grows well and understanding what nature is trying to do. VetSalus believes that the ongoing interaction between animals, be they domesticated or wild, and plants, forms a cornerstone of any regenerative approach and understanding how they interplay is critical. Although there is now an increasing discussion on regenerative agriculture internationally, the industry is still waiting for legislation and support for food producers to catch up. As VetSalus advisors, we aim to be ahead of these discussions, to ensure we are best placed to advise and future proof farming businesses.

About that there can be no room for confusion! 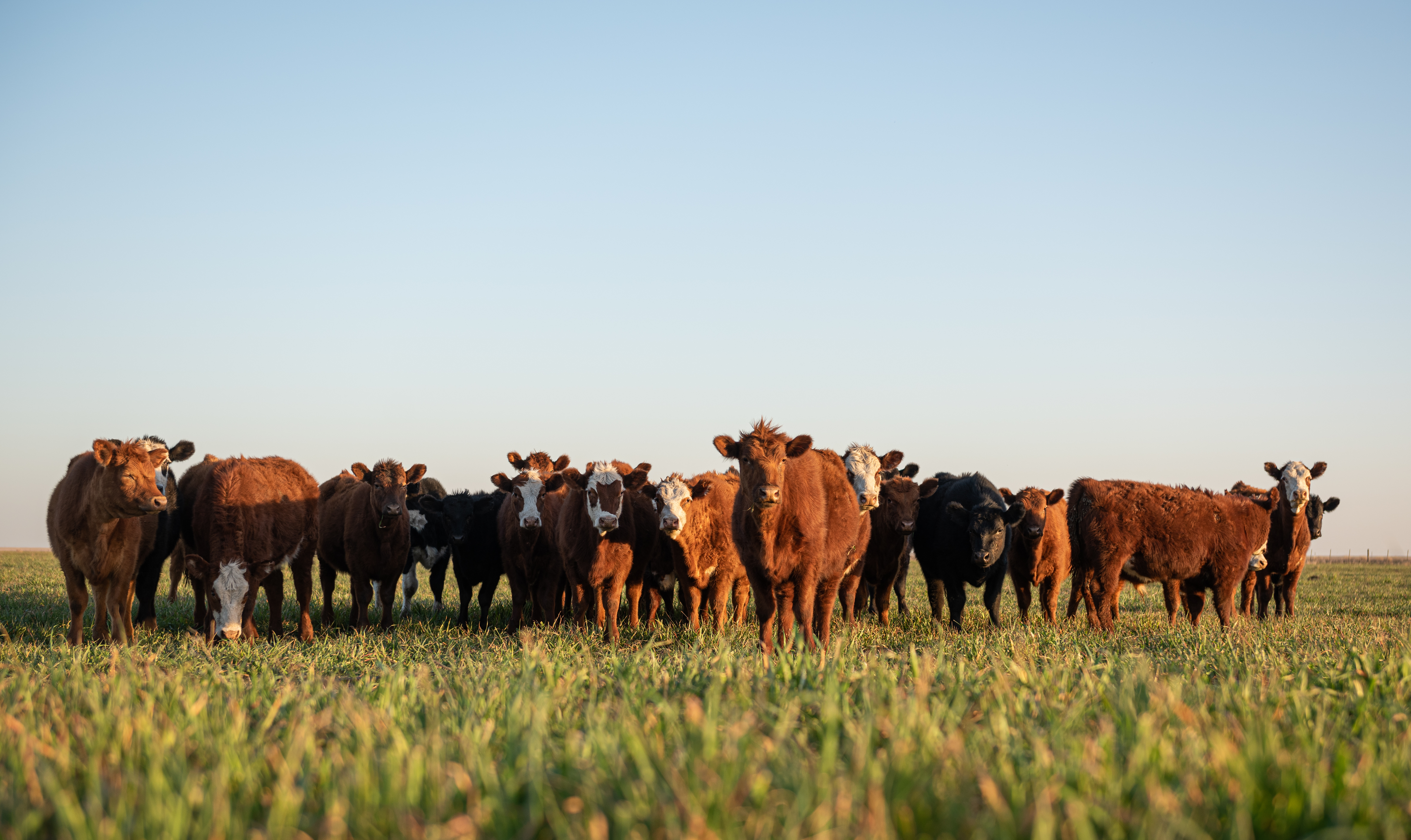